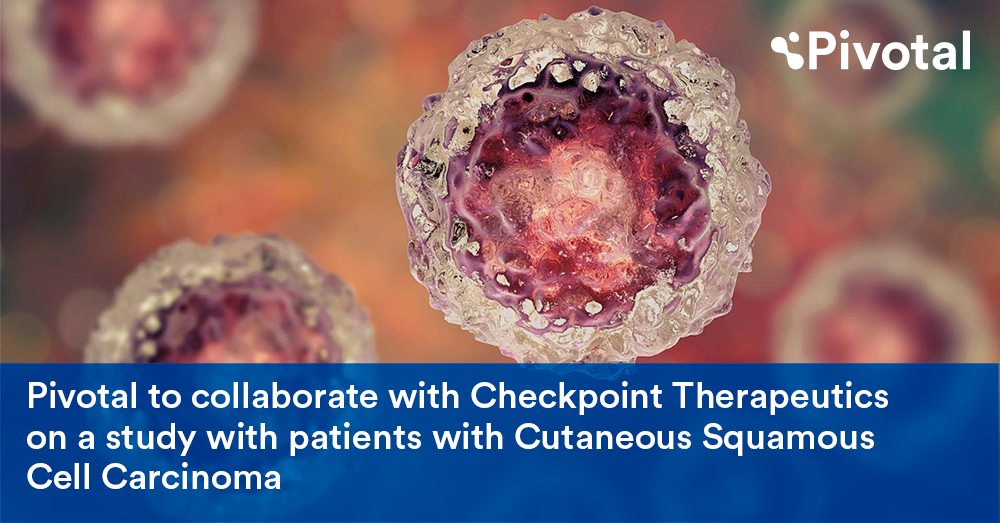 Cosibelimab is a potential, best-in-class, high affinity, fully-human IgG1 monoclonal antibody that directly binds to PD-L1 and blocks the PD-L1 interaction with the programmed death receptor-1 (PD-1) and B7.1 receptors to reactivate an antitumor immune response. In addition, cosibelimab has a functional Fc region that may bind and activate natural killer (NK) cells to enable cell-mediated antibody-dependent cellular cytotoxicity (ADCC).

Cosibelimab is currently being studied in a global, open-label, registration-enabling Phase 1 clinical trial intended to support U.S., EU and other foreign marketing approval applications worldwide. Enrollment in the metastatic cSCC cohort of the trial has already surpassed 60% of the enrollment target. Checkpoint is also enrolling patients with locally advanced cSCC to support a potential second indication for cosibelimab.

“Previously released interim results for cosibelimab were presented in a poster presentation at the ESMO Virtual Congress 2020. Results included a 51.4% objective response rate by investigator assessment in the first 37 metastatic cSCC patients, including several complete responses. Safety and tolerability among the first 114 patients treated with all histologies was excellent with grade ≥3 treatment-related toxicity of only 5%,” said James Oliviero, CEO, Checkpoint Therapeutics. “We are proud to partner with Pivotal to gain access to Western European countries to accelerate the completion of enrollment of this pivotal study in cSCC and to help support a planned MAA submission for European approval based on data from the ongoing study, as well as access to KOLs in key European countries.”

About 2.2 million people worldwide have cSCC at any given time. It makes up about 20% of all skin cancer cases. Most squamous cell carcinomas of the skin are surgically treated with a free margin of healthy tissue and this is the preferred treatment modality if possible. Radiotherapy, given as external beam radiotherapy or as brachytherapy (internal radiotherapy), can also be used as complementary treatment, after a recurrence or in places were aesthetics sequela are unacceptable.

While most cases are localized tumors amenable to curative resection, approximately 8% of patients will experience a local recurrence, 5% of patients will develop nodal metastases, and an estimated 2% of patients will die from their disease. Ten-year survival rates are less than 20% for patients with regional lymph-node involvement. For those patients who develop distant metastases, the median survival time is estimated to be less than two years. In addition to being a life-threatening disease, cSCC causes significant functional morbidities and cosmetic deformities based on tumors commonly arising in the head and neck region and invading blood vessels, nerves and vital organs such as the eye or ear.

“The combined expertise in clinical research excellence of both Checkpoint Therapeutics and Pivotal will enable us to accelerate research and provide access to a novel therapy in this unmet medical need area,” said Dr Lourdes Huarte, VP Regulatory & Clinical Operations at Pivotal, “We look forward to positively impacting the lives of people facing cSCC and its complications in Europe.”

This press release may contain “forward-looking statements” within the meaning of Section 27A of the Securities Act of 1933 and Section 21E of the Securities Exchange Act of 1934, each as amended. Such statements include, but are not limited to, any statements relating to Checkpoint Therapeutics’ plans to submit one or more Biologics License Applications (BLAs) and seek regulatory approvals for cosibelimab worldwide, statements regarding the potential differentiation of cosibelimab, statements relating to the functional Fc domain of cosibelimab translating into potential enhanced efficacy, statements relating to the timing of the completion of enrollment and full top-line results, and any other statements that are not historical facts. Forward-looking statements are based on management’s current expectations and are subject to risks and uncertainties that could negatively affect our business, operating results, financial condition and stock value. Factors that could cause actual results to differ materially from those currently anticipated include: risks that regulatory authorities will not accept an application for approval of cosibelimab based on data from the ongoing Phase 1 study; risks relating to Checkpoint Therapeutics’ growth strategy; its ability to obtain, perform under and maintain financing and strategic agreements and relationships; risks relating to the results of research and development activities; risks relating to the timing of starting and completing clinical trials; uncertainties relating to preclinical and clinical testing; Checkpoint Therapeutics’ dependence on third-party suppliers; its ability to attract, integrate and retain key personnel; the early stage of products under development; Checkpoint Therapeutics’ need for substantial additional funds; government regulation; patent and intellectual property matters; competition; as well as other risks described in Checkpoint Therapeutics’ Securities and Exchange Commission filings. Checkpoint Therapeutics expressly disclaims any obligation or undertaking to release publicly any updates or revisions to any forward-looking statements contained herein to reflect any change in its expectations or any changes in events, conditions or circumstances on which any such statement is based, except as required by law, and it claims the protection of the safe harbor for forward-looking statements contained in the Private Securities Litigation Reform Act of 1995.

How we can help

All fields are required

Thank you for
getting in touch
Go back to website